I didn’t write yesterday. I was absorbed in other matters, namely hosting dinner and drinking champagne while I made gluten-free chocolate chip cookie ice cream sandwiches. Yep, that’s my excuse. It was a good day. I didn’t write, but I thought about the prompt, intensely.

I was listing my fears in my head: spiders, centipedes (the foot-long ones of the tropics), ghosts, grizzly bears, tsunamis, and death. These are still my fears, so I haven’t overcome them. I haven’t been afraid of much else, and truthfully I am not so afraid of these things, that I am paralyzed by any of them. Ok, so I wouldn’t confront a grizzly bear, but I’ve been pretty close to them at zoos and been able to appreciate their beauty.  So I went to bed before 10pm with no post brewing in my head.

As I was waking up this morning, I was feeling incredibly guilty for my first missed blogging day, and talked to Tom about it.  He reminded me of a story about one of my fears, that I have been thinking all day as to whether or not I want to share it on the internet. I’ve made my decision.

I was in high school sitting in my Senior English class. It was a small group of very smart kids and an even smarter teacher. Mr. Anderson, six-foot-six, bespectacled-but-handsome, had his feet up on his desk. We were all discussing a book that I don’t remember the title of. We were talking about men and women and intimidation. For some reason, I said, “I’m afraid of men.” He must have thought I was joking because he jumped out of his chair to his full height and said, “WHAT? YOU”RE AFRAID OF MEN?” in his legendary booming Shakespear-in-the-round voice. I was so startled that I burst into tears.

He quickly realized I was not joking. I was sobbing in front of my classmates, partially because I was embarrassed by my own reaction. He said, “class dismissed.” One we were alone he apologized profusely and I  apologized for crying – trying to laugh it off through my tears.

I have thought about this moment many times in my life, and told the story many times to friends. What I learned about myself that day, was that I was vulnerable to male aggression – powerless even. I could be reduced to tears by any dude who raised his voice. I also learned that the quickest way to disarm my opponent was to cry.

Having been raised by a meek single mother and having very little exposure to a loud dad, I had to build up my tolerance other ways. This was particularly obvious when I was in my first real relationship. My arguments with Tom, always ended with me crying. I felt like I lost every fight. He apologized once the waterworks began and it would bring us back to calm discussion. I don’t know when my crying stopped, but Tom can raise his voice now and I can counter with a joke instead of tears. I am glad that Melody has a loud father that she sees her mother disarm with laughter.

This was my ninth post for #NaBloPoMo and was inspired by the prompt given to me on Friday by Laura. Here is what’s next:

Prompt #9 (Nov 10): A friend of mine reinvents herself about every few years. Recently, she realized that all of her former selves probably wouldn’t be friends with each other, and that’s not necessarily a bad thing. What about you, do you think you’d be friends with whoever you used to be?

5 thoughts on “Big, Loud and Hairy” 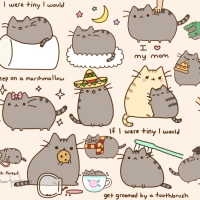